As a local public works agency headquartered in Columbus, Ohio, the Franklin County Engineer's Office is responsible for the maintenance and construction of 271 miles of county roadway and 351 county bridges, as well as upkeep of all county ditches, drains, retention basins, and other storm water facilities within the right-of-way of county roads in unincorporated areas. To meet the continuing development and infrastructure needs of Franklin County, the Engineer's Office utilizes the latest technologies for determining and maintaining roadway centerlines and boundaries; retracing and setting new monuments for original public land surveys; preparing geographic information system mapping for real estate tax assessments; and establishing precise countywide horizontal and vertical control to maintain uniformity in construction, surveying, and mapping.

Franklin County Engineer
#TeamFCEO participated in the Franklin County Futures Job Fair where we shared information about employment opportunities at our office. It was a great event!
6    View on Facebook

Franklin County Engineer
Smiley Road, between Fishinger Road and Hilliard-Cemetery Road, will be closed from 8:00 a.m. to 3:00 p.m. on Friday, January 27, 2023, for roadway maintenance. This closure is expected to last one day, weather permitting. Local Access will be maintained.
1 1    View on Facebook

Franklin County Engineer
Thanks to everyone who attended the Opportunities Job Fair! We had a great time meeting with people excited to learn about our internship and seasonal opportunities at the FCEO. If you are still interested in joining #TeamFCEO, please visit https://www.franklincountyengineer.org/employment/ to learn more.
12    View on Facebook 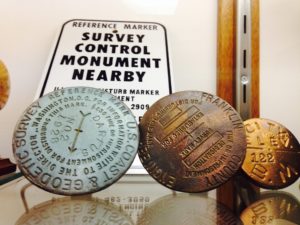 To understand the evolution of Franklin County, one must explore Ohio’s rich surveying history and how it influenced the measurement and division of our local land.

Long before Ohio became a state, it was a Native American territory that was eventually claimed by different nations and colonies. The variety and number of these claims caused Ohio to have more original surveys than any other state.

The first surveyors lived a hard life threatened by the perils of the wilderness far from civilization and family.

The endless forests, tall grasses, and rugged terrain of Ohio made tracking difficult. With only a chain for measurement and a compass for navigation, it is easy to understand why there are discrepancies in some of the original surveys.

Typical compensation, shared by surveyors and their crews, was two to three dollars for each mile measured. In some cases, surveyors were paid with land, which resulted in making them original settlers with large land holdings.

Surveyors guided the development of the new frontier as they clarified land titles and property boundaries, and helped to layout the first roadways and towns that would become the fabric of our state and county. We invite you to explore this fascinating history through our Surveyor’s Journal web pages.

Entry One: The First Survey Leads to War

Entry Two: The Land Ordinance of 1785 and “The Point of Beginning”

Entry Five: Franklinton and Worthington are the County’s First Towns

Entry Fourteen: Columbus is Chosen to be the New State Capital

Entry Sixteen: First Columbus Land Sale is Held at the Start of the War of 1812

Entry Twenty: Meeting the Transportation Needs of a Changing Landscape

Entry Twenty One: The Hallowed Grounds of War

Entry Twenty-Three: The Dawn of Modern Surveying and Road Construction